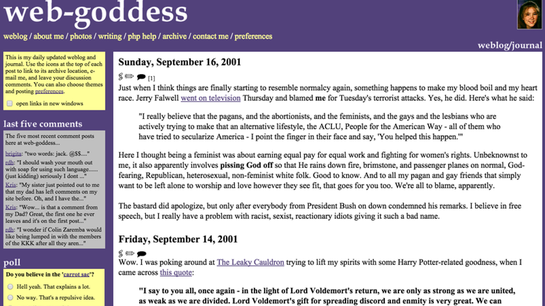 This blog is now 14 years old. FOURTEEN! (I’m sure some of you don’t even realise we had the Internet in 2001, but we did.) Things were a little different back when it launched:

For many years, I marked this day with an epic post where I listed a bunch of interesting stats like how many posts there were, who the most prominent commenters were, etc. Two years ago I stopped, mostly because the dwindling numbers were getting depressing. Yeah, the personal blog is pretty much dead. I think Kevin and John are the only friends from my original blogroll still going. Comments are few and far between. Still, I like the continuity of having this archive of my life for the past fourteen years. It’s the longest I’ve ever done anything, and the longer it goes, the harder it gets to stop. (Hence all the social media stuff I added this year in an effort to keep the narrative of online-me intact.)

I still feel the need for some sort of summation for 2014 though, more as a prompt for reflection rather than anything else: